A Look Back: The Farm Bureau Organization 100 Years Ago

“Merced County was what might be termed virgin territory for rural organization work before the farm bureau came into this county,” wrote County Agent J.F. Grass in his November 30, 1920 Narrative Report. But Grass reported that with a few “good men” of experience placed in office who were “willing workers,” and with ongoing attention to “developing individuals” to be “trained to act as leaders,” “the program of work idea is working out satisfactorily in this county.” As of December 1st of that year, the Farm Bureau of Merced County had fifteen farm centers and 1,075 members. 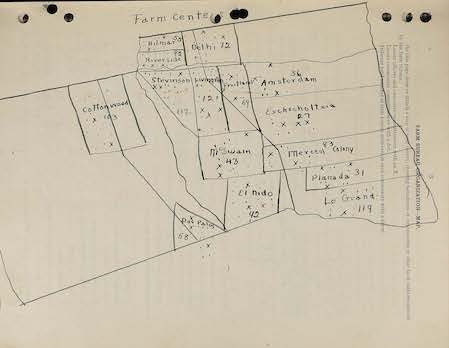 Map of farm centers in the county, from the 1920 annual report of the county agricultural agent.

Three years after the start of the county farm bureau, the 1920 annual report strikes a reflective tone, and Grass takes stock of the factors that are important to the progress of work: the importance of “efficient local leadership,” and of addressing the needs of local conditions, which were found to be diverse across the county. Near the end of the report, he captures an interesting snapshot in time of what he sees as the needs and prospects of those fifteen centers—starting with Amsterdam and ending with Stevinson—based on their population, attitudes, and the physical conditions of the land. Of one center he writes, “moving population and sparsely settled, poor soil to the greatest extant, lack of unity among the settlers.” Of another, a “good center, a group of people in this center who always want to change the existing order of things… always making resolutions.”

To those interested not only in the history of agriculture, but also of civic organization and community development in this county, these and other historic reports from a century ago give firsthand perspective. The 1920 report includes discussion of the Merced and West Joaquin irrigation districts recently formed, the founding of the Merced County Purebred Livestock Breeders Association, and the development of the Farm Bureau Exchange, as well as photographs illustrating farm demonstrations, agricultural clubs, and other work conducted in the county. Now, anyone with an internet connection can freely view and download these historic materials through UC Merced Library and the California Digital Library on Calisphere.

In 2018, the National Archives awarded UC Merced Library a Major Initiatives grant to preserve and digitize these and other records of California’s Cooperative Extension (UCCE) county offices. The award recognized that the Cooperative Extension records represent “documentary heritage essential to understanding our democracy, history, and culture.” Merced County’s UCCE records are among the first the library archived, under an agreement between the campus and UC Agriculture and Natural Resources. Over the course of the three-year grant, collections from fourteen California counties have been archived and are being digitized. They are core to the California Agricultural Resources Archive (cara.ucmerced.edu), an effort the library is undertaking to aggregate and provide digital access to a host of historical research material on California agriculture online.