In addition to archiving the records of county Cooperative Extension records such as Merced’s, the CARA (California Agricultural Resources Archive) project at UC Merced is also preserving historical reports and film from the University of California Division of Agriculture and Natural Resources (UCANR), the statewide organization that oversees UCCE county offices and personnel. In 2019, we accepted several boxes of 16mm film reels from the UCANR statewide office. Produced by UCCE personnel throughout California, the films date from 1953 to 1979 and cover UCANR activities such as the 4-H youth development program, food and nutrition education, wildland management, the ag industry, animals, and adolescent health. 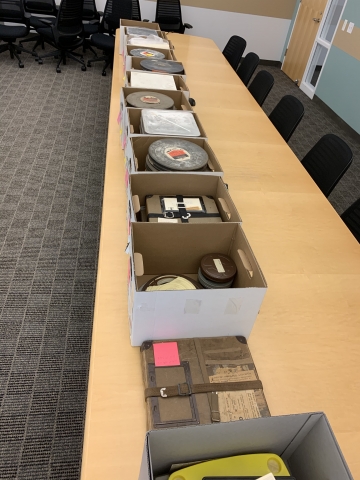 Boxes of film reels from the University of California Division of Agriculture and Natural Resources, UC Cooperative Extension Records.

In previous columns we’ve discussed how archivists approach organizing records. When the library acquires collections, the archivist first conducts a survey of the materials making note of major topics, themes, and how the records are organized. For example, did the material come from the offices of a certain farm advisor or home demonstration agent? This step helps the archivist to process and arrange the materials in a way that makes them easily accessible to the public. In addition to these concerns, the archivist must also take into account the physical properties of the materials. Doing so can help determine the approximate date of records that may otherwise be undated. Some mediums, in particular audiovisual items, are now obsolete and require older technologies to listen to or view them. Archivists need to be familiar with different formats and media types and how to handle them—both to preserve them and to provide access to researchers. 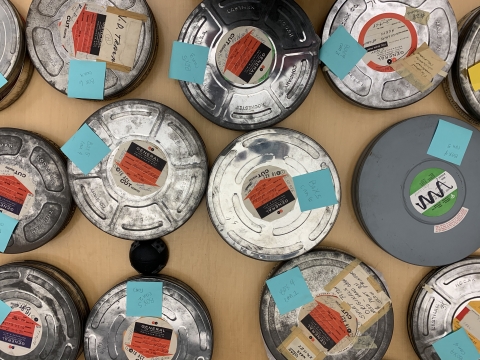 Film reels are laid out on a table and organized by title.

While surveying this collection of over 100 UCANR films, the archivist documented essential details such as the type of canister, the diameter of the reels, and condition of the medium, as well as titles, dates, transcriptions and other production information. Doing this work required opening each film can, and the vinegar smell was very strong! Why? The base of 16mm films made during this time period is cellulose acetate, which carries with it certain preservation concerns. If the reels are not stored in the right environment where temperature and humidity are controlled, and if they are not housed in archival quality boxes and cases, the films are at great risk of developing what is called “vinegar syndrome.” This form of deterioration occurs when acetic acid is released from the film base, leading to embrittlement, shrinkage, and bubbling of the film. Not only does this affect the particular film omitting the acid, but when off-gassing occurs, it can damage any objects in its vicinity. The strong smell of vinegar is an indicator that the process has started. Once vinegar syndrome begins, it is irreversible; if the effects of vinegar syndrome go too far, it becomes impossible to play the media or even transfer it to a digital file format. 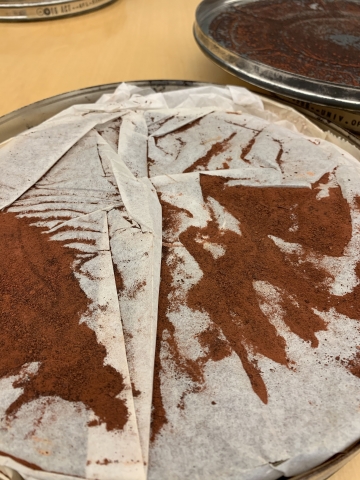 One aspect of deterioration emanates from the metal cans which can rust and cause a red powder to flake off onto the object.

Clearly, these reels were in various states of deterioration and needed immediate attention so their contents would not be lost. However, working with such film requires specialized equipment and trained experts to digitize—all of which comes at an expense. Since we did not know beyond the little information on the cans what the contents of these films were, nor the quality of playback once digitized, we decided on a set of films that would constitute a pilot for preservation and digitization. We worked with the MediaPreserve, a company based in Cranberry Township, PA with extensive experience working with universities, libraries, and other cultural heritage institutions to preserve and digitize such materials. Their experienced specialists helped to guide us through the steps needed to make these films last, including housing in archival quality film cans and digitizing them into sustainable file formats. 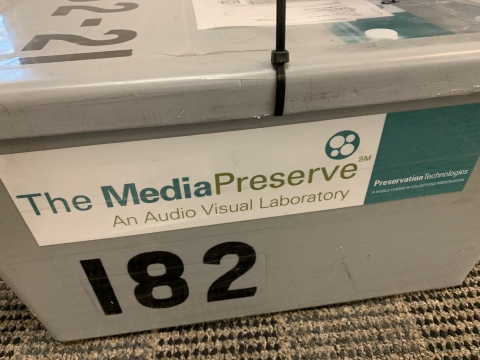 The MediaPreserve sent us their own lock boxes so that the films are protected as they make their way to their offices in Cranberry Township, Pennsylvania.

So far, we have already received the digital files for the first three films of our pilot, and they are high-quality professional productions. One film, titled 4-H Trail, was produced in 1963 to illustrate the extensive range of activities undertaken by 4-H club members in California, with scenes from local club meetings, family farms, camps, and field days accompanied by singing from a county 4-H club chorus. Another film, What’s in Food? (1962) is a production of the “Homemaker’s Notebook” with UCCE home nutritionist Marion Tate presenting information about healthy eating. The last of the three was chosen because of the intriguing title, “Muppetts” on the film’s canister. It turned out to be a series of short clips from 1975 titled Children’s Nutrition (Candy) produced for the KTVU station that feature puppets—not to be confused with the widely known Muppets—speaking about the benefits of eating healthy foods like fruits and vegetables, instead of candy.

We are seeking the funds to support the digital preservation of the other films in the collection. The range of titles include Modern irrigation equipment (1964), Tomatoes (undated), Hills of Grass (Madera County, undated), California deer (1965), and Cows n’ kilowatts 4-H. In the meantime, you can see the films digitized from our pilot on Calisphere.

We look forward to digitizing and sharing more of these films with you.